Wow, What a Deal! 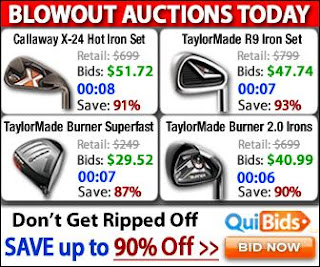 **Disclaimer: this post is neither an endorsement nor a criticism of Quibids***

This certainly caught my eye! You’ve probably seen this banner ad as well, it’s all over the ‘net right now, for an “auction” house called Quibids.com They’re also running some TV ads. Anyways… a set of Burner 2.0 irons for $40.99. Huh?

I checked it out and read all the details about Quibid. In a nutshell: you don’t just sign-up to their site and start bidding, like you would on Ebay, for example. You actually “buy” bids for 60 cents each, and when you bid on an item, the items price goes up in increments of a penny. So, every time you bid on something, it costs you 60 cents. Plus, when the auction clock runs down, and you place a last-second bid, they add 10 seconds to clock… so you can be involved in an avalanche of “last-second” bids if you’re bidding against a bunch of people for the same item!

Of course, you have to realize that Quibids is a business, with staff, overhead, lots of bandwidth charges, etc. and they have a lot of “small potato” auctions that probably just break even for them. But still… a good haul for a $700 retail set of irons!