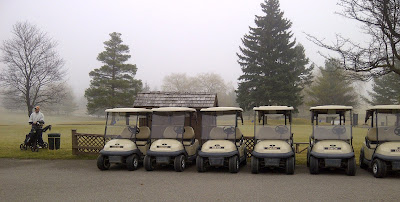 What a week! We opened the golf course – fully – on Friday (March 16), and we were partially open since last Tuesday. This is definitely an “early opening” record for us. And it’s been BUSY…

The above picture was taken on Saturday March 17 at about 10am, just as the fog was lifting. Of course, the topic of conversation among many of the golfers: “is this the earliest you’ve been open”?
I’ll qualify an answer. In terms of being fully open – all 18 greens & tees, driving range, and carts on the course – then yes, this is the earliest. There have been years when we’ve partially opened at around this time (I can remember one year in the late ’90s, we opened the temporary layout during the second week of March) but late March or early April usually surprises us with one last patch of snow, so we’re bracing for the possibility of it. After all, it is, technically, still winter.
This is in stark contrast to last year – you may remember the dismal spring we had! So we’ll take this anytime.