And Now, for Something Completely Different 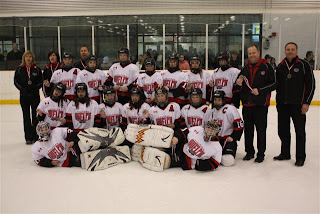 Pardon the indulgence, but I have to brag a bit about my daughter’s hockey team, the Guelph Thunder Bantam BB. They had a great season, finished first in their division, won two of four tournaments (and one to go), and just last Saturday, took home the Silver medal from their league’s “Final Four”. Easter weekend they’re playing in the Brampton Canadette’s tournament, the biggest women’s hockey tournament in the world. And finally, the weekend after they’ll be in the Provincials – they had to win their way into that one. Way to go, ladies & coaches!
Okay, back to golf. We may open the course on Wednesday… stay tuned.

Replace this widget with the Blog Subscriptions Jetpack plugin or MailChimp signup form
What do you think of our website?
Leave Feedback
Search
Resources
Get in Touch!
Contact Us!
Copyright 2015 Victoria Park Golf Course. All Rights Reserved. Built By Guelph Website Developers Intrigue Media. All Rights Reserved.
Privacy Policy |Sitemap  | Advertise With Us | Job Opportunities
The Re-Birth of Tiger
And Away We Go…