Golf will return to the Olympic Games in 2016 in Rio de Janeiro, after a 112-year absence. So I guess another 4 years of waiting isn’t so bad.
Interestingly, the 1904 gold medal winner in mens’ individual play was a Canadian, George S. Lyon; but in team play it was a sweep for the U.S. team.
Needless to say, golf’s inclusion in the 2016 (and also committed in the 2020 games) is huge for the sport. The global exposure to all age levels will be significant, and we anticipate that interest in golf among young people will surge – similar to what we saw during the crest of Tiger Woods’ career. 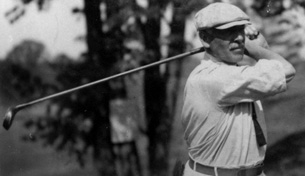 Here’s a photo of the venerable Mr. Lyon “back in the day”.